In honor of Women’s History Month, we are shining a light on two female pioneers that we at FFA have been deeply inspired by – Katherine Graham and Madam C. J. Walker. Both these women have changed the landscape of entrepreneurship and business, and what it means for women to be seen in leadership roles.

“The thing women must do to rise to power is to redefine their femininity. Once, power was considered a masculine attribute. In fact, power has no sex.” – Katharine Graham.

When Graham first got married to Philip Graham, and for a while afterwards, she left her career and remained distant from the family-business of the Post. However, following her husband’s death, Graham took leadership of the newspaper, and gradually transformed it into one of the most influential, powerful and widely circulated publications in America.

With courage, persistence and hard work, Graham became the most successful female CEO in her day. Under her authority, The Washington Post became known for its aggressive investigations when it comes to reporting. “News is what someone wants suppressed”,  she once famously said. “Everything else is advertising.”

Unlike Katharine Graham, who was born into a wealthy family in New York City that owned The Washington Post, Madam C. J. Walker was born into a family that just gained freedom from slavery, and a significant portion of her early life was spent picking cotton and doing domestic work in Louisiana and Mississippi. 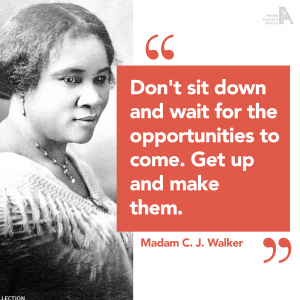 Madam C. J. Walker innovated a special hair care treatment product after suffering through massive hair loss due to a scalp disorder, and going through numerous experiments to try to improve her hair condition. As so many founders find even today, her business was born out of her own experience. Her hair care treatment became widely popular among the community of African American women.

Walker took pride not only in founding and launching her business, but also in helping African Americans through charity and educational works. Today, she is considered the first American woman who is a self-made millionaire. She exemplified great tenacity, resilience and creativity, and her story has been a source of inspiration for so many  underrepresented entrepreneurs.

We look up to these women and so many others who came after them for being the early role models in female leadership, for breaking the norm and making it possible to see women in these roles. For dedicating their lives to promote gender equality at workplaces and elevating women’s voices by bringing more of them into leadership positions. We are grateful for the road paved by Graham and Walker, and we take great pride in aligning our work and mission with their legacy.